The High Line here in NYC was voted by Wallpaper Magazine as the element that added the most to our quality of life. One aspect in the conversation about the park revolves around this industrial relic/ruin and whether it is better redeveloped, or would it have made a more effective statement as a relic left to nature…an anomoloy in our overdeveloped city. It’s a valid argument, and this idea of a relic left to nature was brought up again when I read news of the latest Census figure results.

“Laying bare the country’s most startling example of modern urban collapse, census data on Tuesday showed that Detroit’s population had plunged by 25 percent over the last decade. It was dramatic testimony to the crumbling industrial base of the Midwest … and the tenuous future of what was once a thriving metropolis.

The number of people who vanished from Detroit — 237,500 — was bigger than the 140,000 who left New Orleans [after Hurricane Katrina]. The loss in Detroit seemed to further demoralize some residents who said they already had little hope for the city’s future.

“Even if we had depressing issues before, the decline makes it so much harder to deal with,” said Samantha Howell, 32, who was getting gas on Tuesday on the city’s blighted East Side. “Yes, the city feels empty physically, empty of people, empty of ambition, drive. It feels empty.”

It might be interesting to let a single, small piece of infrastructure be reclaimed by nature when it lies among constantly new and cared for towers of brick and glass. But what happens when that relic is a city block, a neighborhood, or the city itself?

Photographer and urban sociologist Camilo José Vergara proposed in the late 90’s that a “skyscraper ruins park” be built in downtown Detroit. In his book American Ruins, Vergara suggested that, “as a call for renewal, as a place within our national memory, a dozen city blocks of pre-Depression skyscrapers be stabilized and left standing as ruins: an American Acropolis.” 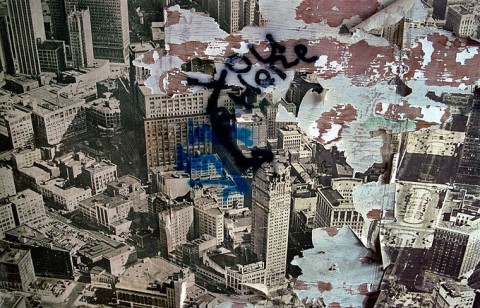 What does leaving a city standing as ruins really mean? Movies and photography have always been able to offer attempts at this question. I immediately think of I Am Legend and Will Smith walking through a deserted New York City. Times Square becoming quiet and home to deer and former residents of the Central Park Zoo. It’s easy for art to take a step into the future and create a vision of the “what if?” But what if that vision of what could happen differs from what should happen? 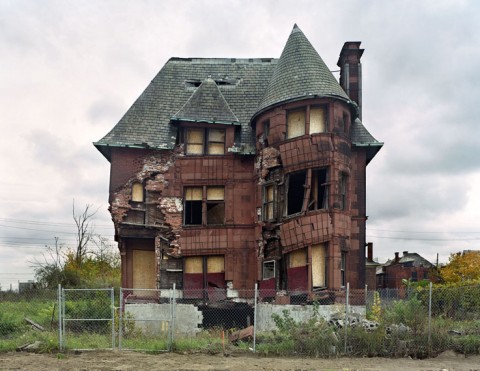 In “The Ruins of Detroit,” by Yves Marchand and Romain Meffre, the city once filed with the sounds of clanging machinery and Motown music is silent. The vision is a case of nature reclaiming land and slowly erasing the remaining elements of a failing metropolis. The city is failing, but has it failed? Detroit still remains home for many and not everyone has given up  and walked away. In “Detroit Disassembled” by Andrew Moore, the poet Philip Levine writes: “Their calm in the face of the ravages of man and nature confers an unexpected dignity upon the subjects of his camera, the very dignity I had assumed daily life had robbed them of.” 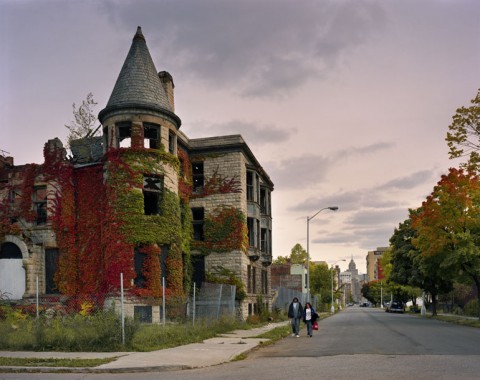 Detroit is a living city, with real people being affected. Yet they are walking around in a city like no other. Unlike anywhere else, the decay and desertion of the city are not isolated events. They have become a natural component of city/landscape. The city and the solutions to its problems must revolve around more than an art project opening our eyes. Statements like Vergara’s are controversial and even have some bit of 18th century romanticism in their ideas. Vergara later wrote in Metropolis:

“We could transform the nearly 100 troubled buildings into a grand national historic park of play and wonder, an urban Monument Valley… Midwestern prairie would be allowed to invade from the north. Trees, vines, and wildflowers would grow on roofs and out of windows; goats and wild animals – squirrels, possum, bats, owls, ravens, snakes and insects – would live in the empty behemoths?” 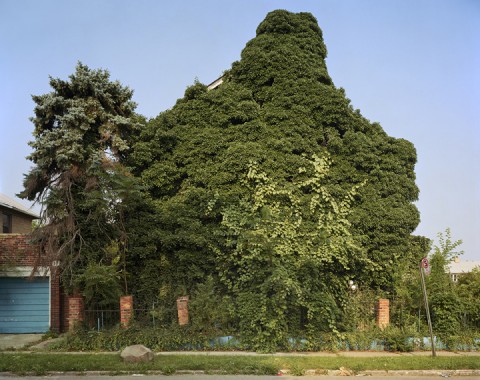 A team of explorers stumbles upon the modern-day ruins of ‘Rome,’ the industrial capital of the 20th century that helped to fundamentally shape the modern world. Yet the explorers find irony that a city built upon industrial capitalism and planned obsolescence is now a fossilized remnant of a declining empire.

It’s an artistic dream, but I don’t want it to be the eventual reality.

There are plenty of examples of unbuilt American dreams already in existence. But the decline and desertion of a living breathing dream? How does one address this devastating problem head on, in a realistic manner? 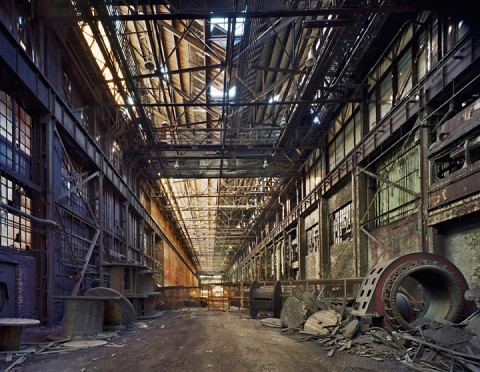 Time you enjoy wasting, was not wasted. — John Lennon