A question has been rattling around in my head because of the holidays – is our current consumerist culture incompatible with the larger goals of sustainability? While the atmosphere of the holiday season has subsided, what remains among the drifts of accumulated snow are piles of trash. Bags filled with empty boxes of computers, clothes, books and other gifts that had been given and received. All of this is because of the heavy influence cultural conventions have on our behavior. While the consumer culture may be the elephant in the room when it comes to bigger environmental and social discussions, I do believe that there are businesses like the Paris shop Merci that use consumerism to serve larger environmental or social goals.

Alot has been written about the consumerism that surrounds Christmas and there is a very long history regarding America’s complicated, but interesting relationship with the holiday.1 Without getting into a theological discussion on what Christmas, and the holiday season should mean, I believe its safe to say that commercialization has fully occurred and we are knee deep in our habits of consumption. I think one of my favorite commentaries on this topic is the work of Reverend Billy and the Stop Shopping Gospel Choir.

“We are instructed that our way of life is shopping. That our democracy is shopping. Citizenship is shopping. We don’t need towns and cities anymore because we have a shopping experience.”

“Corporations want us to have experiences only through their products. Our neighborhoods, ‘commons’ places like stoops and parks and streets and libraries are disappearing into the corporatized world. Replaced by ‘big boxes’ and chain stores.”

The larger issues surrounding our nation’s dependence on consumption in all forms is, in general, a difficult problem that desperately needs to be addressed. But I do not believe that all consumerism is bad.

While I personally find the holiday season to be about giving – giving of my time and undivided attention, giving of my talents to make their day a bit easier, giving of unconditional love – if done with the right intentions, there are instances where consumerism can be used for larger environmental or social goals. Companies and organizations are trying to use consumerism for good. The idea of ‘one for one’ is being followed to help bridge the gap between consumerism and the need to help others. Project(RED) is probably the most notable, but others like Tom’s Shoes and the World Food Programs’s Feed Bag are trying to combine our desires to do good, feel good, and sometimes just look good, into a mission of meaningful change that helps more than a corporate board and its shareholders.

One criticism of the movements listed is that while everyone may want to do good through their actions, where do “the right reasons” and the trait of humility play into these actions. Not everyone wants to walk around as a billboard highlighting their charitable work. Is there another way that could cater to clients that want to shop with a conscience?

My wife and I have always had a dream to have our own storefront…selling our artwork, furniture, clothing designs, and basically anything else we either made or felt we needed to share. But the objective was always about taking our love of beautiful things and joining it with the idea of giving back to the community around us by supporting local craftsmen, artists, and community organizations. While in Paris (I promise at some point, I’ll stop indulging in my Francophile obsessions and get back to bikes or something), we saw that our dream could indeed be a viable reality. 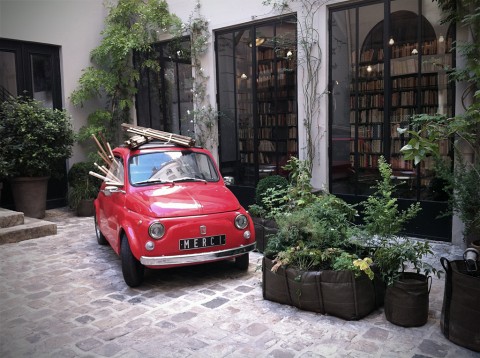 Merci is a 1,500 square meter shop in the Marais neighborhood of Paris where 100% of the proceeds go to a foundation that helps women and children in Madagascar. Opened within a 18th century building in March of 2009 by Bernand and Marie-France Cohen (the couple behind the luxury children’s clothing brand Bonpoint), the idea of the store is a response to a series of questions:

Give, but how? How to be supportive? How to generate funds in a sustainable manner without calling for donations or charity?

Can you operate a store as a classic commercial shop and not as a charity store? A concept store combining luxury consumerism with philanthropy?

As part loft, part cafe and part garden space, the store is filled with vintage and new clothing, designer furniture, a flower shop, and other items that cover a range of aesthetics. Alot of the clothing on sale has been created and priced exclusively for Merci. Designers like Isabel Marant, Azzaro, YSL, Chloé, Stella McCartney, A.P.C. and Paul Smith all lent their hand by offering unique pieces at 30% to 40% below market. This effort on the part of Bernand and Marie-France and the designers they stock has allowed them to give back to a cause close to their heart. Through her 30 years of work with Bonpoint, Marie-France Cohen has established connections where she is able to track funds and keep focused on the priority of getting young women and children off of the streets, teaching them skills and trades to help them achieve a better life.

While Merci is decidedly an upmarket experience, high end brands are balanced by simple glassware, vintage Bakelight switches and sugar cane fiber plates. It’s a step away from somewhat intimidating “gallery” shops like Moss or Colette. Merci is an approachable blend of the rare and everyday with products whose value lie more in their function, their spirit, and their ability to not become obsolete as fashions change. 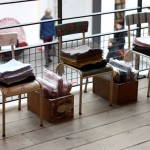 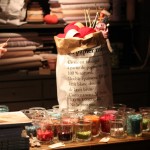 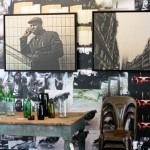 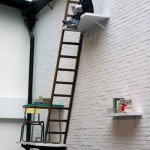 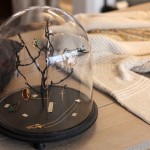 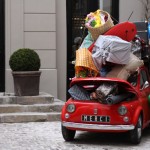 Images by Morning by Foley

Consumerism is a fact of life. Especially in this country, the all consuming nature of our daily lives is what fuels our economy, and by extension our democratic process. But, I don’t necessarily read it as a signifier of something inherently bad.

Since projects like Feed Bag exist, and stores like Merci are able to open and give back, what would happen if more communities were filled with businesses like these? Is there a sustainable economic model of business that is less about the accumulation of wealth and growth, and more about giving excess back to those less fortunate?

1 The short history of Christmas in America basically follows along the lines that the original Puritan settlers viewed the holiday as a pagan, Roman winter celebration. Even as late as the Civil War, Christmas was recognized in only 18 states. It was Clement Clarke Moore’s publication of “Visit from St. Nicholas” where the popular emphasis turned towards the holiday being a domestic celebration with a formalized image of a white-beared man giving gifts to children. In that story of gift giving, the door to commercialism was opened up with the retail industry fully embracing the holiday “Christmas Shopping Season” as its own.

NOTE: This post was originally featured on Intercon January 20th.

The study of architecture is marvelous training for anything but architecture. — Saul Steinberg