Memorial Day weekend in New York City means Fleet Week. I bike to and from work along the Hudson, and its been interesting to watch the ships pull into dock and the Navy and Marine soldiers and sailors fill the city. Whether I need to or not, I always stop for a few moments in front of the one ship constantly docked – the USS Intrepid. The Fighting I served in World War II, Vietnam, and also acted as the recovery ship for a Mercury and Gemini space mission. There is something about it that, no matter what the age, takes every man back to being an awestruck 6 year old boy. 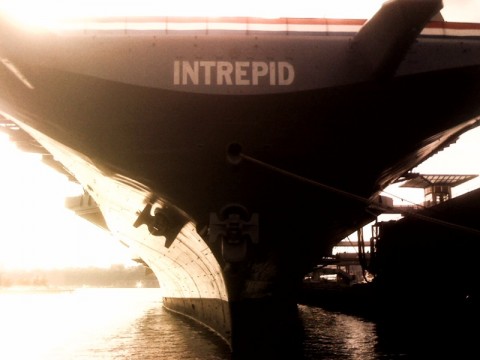 One of the more interesting pieces of equipment sitting atop the deck of the Intrepid is the awkward, but sleek SR-71. On a recent visit to the ship, my wife said to me, “Now I know what you boys get all worked up about.” She became so enamored with the SR-71 that she now has a little model of it sitting on her desk at work.

Commissioned to fly reconnaissance missions from the 1960’s to the 1990’s, ‘the sled’ could fly 2,664 miles and hour.  The below quote was contributed from Pete Wallace in a story from the pilot’s 400+ hours logged flying the Blackbird:

One day, high above Arizona , we were monitoring the radio traffic of all the mortal airplanes below us. First, a Cessna pilot asked the air traffic controllers to check his ground speed. ‘Ninety knots,’ ATC replied. A twin Bonanza soon made the same request. ‘One-twenty on the ground,’ was the reply. To our surprise, a navy F-18 came over the radio with a ground speed check. I knew exactly what he was doing. Of course, he had a ground speed indicator in his cockpit, but he wanted to let all the bug-smashers in the valley know what real speed was ‘Dusty 52, we show you at 620 on the ground,’ ATC responded. The situation was too ripe. I heard the click of Walter’s mike button in the rear seat. In his most innocent voice, Walter startled the controller by asking for a ground speed check from 81,000 feet, clearly above controlled airspace. In a cool, professional voice, the controller replied, ‘ Aspen 20, I show you at 1,982 knots on the ground.’ We did not hear another transmission on that frequency all the way to the coast.

A brilliant bit of advice from Maj. Walter Watson regarding flying one of these things: “Keep the pointy end forward.”

Note: If you’re into spy planes, read this essay by former U-2 pilot Cholene Espinoza, The Last Days of the Dragon Lady.

I worked hard, and if you work hard you get the goodies. — Steve McQueen