This image, worked on over 7 years ago, has a mind of its own in regards to where it appears. I’m hoping it’s getting people to say “what if,” because initially it was a simple idea about reusing the existing Santa Fe rail station and the elevated infrastructure to stimulate investment, interest and excitement. 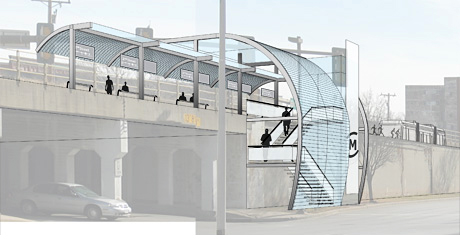 It basically evolved because I got tired of hearing about “remember when” regarding downtown Oklahoma City. While Oklahoma City didn’t have a chance to develop a historical core prior to the explosion of automobile usage (in the east coast NYC/Boston/Philly sense), Oklahoma City’s development history was uniquely shaped by intersections of a river and national rail lines. This infrastructure shaped our past growth and the sketch is a result of wondering why couldn’t our rails and right-of-ways still be utilized to shape our future and program the way the city would continue to develop?

I plan on writing more about this specific idea, but right now there were a few other micro examples of modes of transit programming cities that have been recently floating around in my head. What follows is by no means an encyclopedic examination. It’s just rambling.

Previously, I wrote about Park Avenue, Oklahoma City, and the fact that infrastructure needs to encourage people to experience their city in a way different than the suburban dashboard experience. If you’re interested in more  information, along with some wicked pictures and old drawings, definitely check out Joseph Brennan’s page on the Fourth Avenue Improvement.

Since then, I have been thinking about ways in which infrastructure and transportation have changed the way our cities and architecture works. One of the first examples that come to mind is something that I see everyday outside of my office on 6th Avenue. 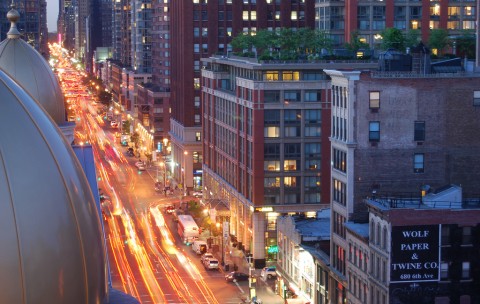 After the Civil War, new retailing advancements called “department stores” began appearing on Broadway, which had developed into the primary shopping street for New York City. But as the elevated train line was built on 6th Avenue in 1878, the entire shopping district soon shifted to this area.

Buildings like the B. Altman Dry Goods Store and the Hugh O’Neill Dry Goods Store opened shop and had a very unique feature specific to 6th Avenue architecture at the the time – the large department stores had highly ornamented, distinctive second floor facades that were intended to be seen by passengers on the elevated train lines. It’s a characteristic that has been retained in new construction projects like the Caroline building.

In older cities like New York and Boston, transportation influences reach even farther back than rail’s influence – countless urban facades, spaces, and even the nature and program of the streets were predicated by the use and the ability to be seen by elevated riders on horseback. One of the more picturesque and unique examples of equestrian oriented urban space is the beautiful Sniffen Court. Every time I pass by this court, I have to wonder what our suburban neighborhoods would look like if the most prominent visual feature of our homes wasn’t the drive way and carriage/garage door. 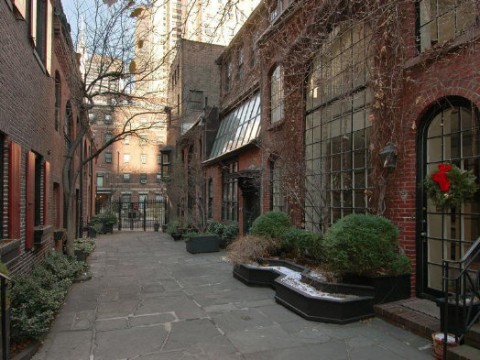 There is a very interesting article in Harvard Design Magazine 30 by John Stilgoe that I wanted to pull some pieces from. It focuses on the growing enthusiasm for bicycles and their effect on urban change and infrastructure at the end of the 19th century. Stigloe makes a comment about this elevated, equestrian like viewpoint:

“Ordinary riders sat so high that they faced equestrians and buggy drivers almost equally: They looked down on pedestrians. Bicyclists looked ahead in urban traffic, sprinted through gaps, and sped along cobbled and brick streets…the tires riding easily over gaps between cobblestones. At first quintessentially urban, the ordinary proved capable of moving over even poorly paved roads…and into the countryside.” 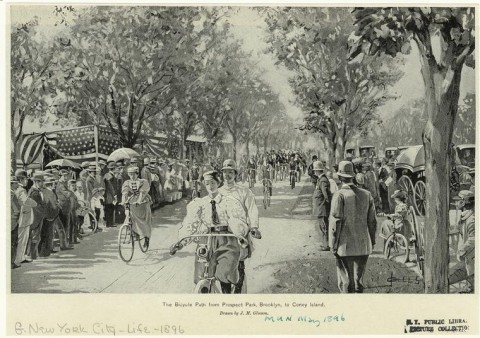 The image above, from the New York Public Library Digital Collection, is a great illustration of the bicycle path from Prospect Park, Brooklyn, to Coney Island in 1896.

Bicyclists, young men and boys were able to expanded their “theaters of operations,” especially when they brought their bikes aboard trolleys and trains … “even girls rode far from home and shrank city and town distances in hitherto male ways.” Those words make me recall a point by Steve Jones…”a consequence of increasing mobility is that the world’s populations are beginning to merge genetically…suggesting that the most important even in recent human evolution has been the invention of the bicycle.”

There were also a few other parts in the article worth mentioning:

“Few design historians understand period apartment-house bicycle parking garaging when they prowl dusty basement laundry facilities that long ago crowded out cycles.” Doing laundry in my own apartment building’s basement looks immensely more interesting when I try to see it in this light. And while that was the late 1800’s, the 21st Century seems to be copying a few lines from the past. NYC building code is beginning to require bicycle parking facilities in all new construction for commercial and residential projects. Why does a measure like this matter? Because parking helps make commuters (99% of car trips in the United States terminate in a free parking space) — a lesson we’ve learned long ago with cars.

Also, by the mid 1890’s, Albert Pope (among other bicycle related endeavors, owned the largest bicycle-manufacturing firm in the world in 1883) “funded a new department of road engineering at MIT and repaved a section of Columbus Avenue in Boston to demonstrate the usefulness of asphalt, but it was the massive petitions of the League of American Wheelman, bicycle retailers, resort owners, and other businessmen profiting from the new craze submitted to President Benjamin Harrison and Congress that galvanized road-paving efforts.” The bicycle craze helped to stir the imagination with dreams of individual travel and created a road construction boom, something I had only associated with the automotive movement. It turned out to be a construction boom that would ensure the bicycle’s own demise. 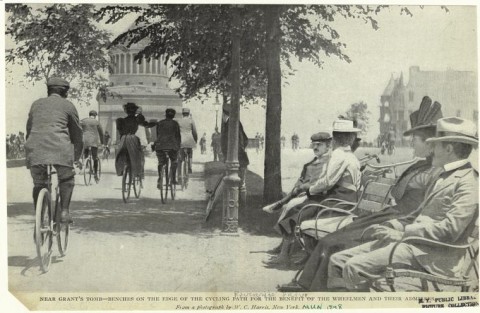 The 1898 photograph above, from the New York Public Library Digital Collection, is taken near Grant’ tomb on the edge of the cycling path built for the benefit of the “wheelmen and their admirers.”

In describing the history of the expansion of bicycle usage, Stigloe’s article raises one question that could be interesting as cities try to develop multi-modal transportation options – can right of ways serve dual purposes?

Aside from the image of cyclists rapidly filling in behind the wake of trolleys as they moved up and down the streets, I’m thinking about the dedicated bus lanes in the highway medians of Curtiba; the horse paths being the precursor to rail right of ways in boulevards like the Kansas City Trolley Trail in Brookside and Waldo; and what could become a well planned transit/park/pedestrian connection down the new boulevard in Oklahoma City.

In OKC, it appears that they are earnestly looking at transit as a MAPS ballot issue, but the problem of density and suburbia is a very big hurdle that needs to be seriously addressed for anything to work. It’s a chicken/egg, cart before the horse kind of question. But if you look at the example of 6th Avenue in 1878, I would argue that you “do the hard things first.” Or a more cinematic phrase, “If you build it, they will come.”

I am certain that answers that work for New York City quite possibly won’t work for Oklahoma City. It’s a unique place, with unique attributes, that needs an equally unique solution. But in order to find a solution that works, it can’t be arrived at by utilizing individual parts. A solution should involve thinking about transportation initiatives as multi-modal and multi-scale: a whole that encompasses walk-ability, sharing roadways with bicycles and cars, and mass-transit connections of the city center to surrounding neighborhoods and bedroom communities.

For lack of a more elegant closing, I want to reference an excellent post from a colleague of mine over at Intercon. Our buildings shape the public spaces, but the public spaces of sidewalks, roadways and transit corridors in turn shape our density and how our cities and buildings are designed and used.

Opportunity is missed by most because it is dressed in overalls and looks like work. — Thomas Alva Edison