If you remember Warren G, finish that lyric up and I’ll send you a prize.* 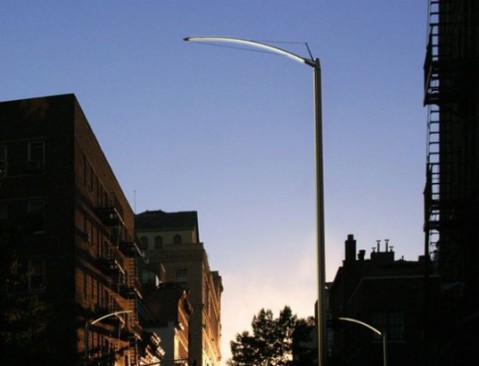 The design for the new NYC street lights stem from a competition held in 2004 and they are not intended to replace all the streetlights, but to simply provide a more modern design to be installed in areas that are newly developed or areas where it would make sense aesthetically.

The following is in response to an article I read Monday morning on the OKC Central website. That evening as I rode the bike home, I tried to pay attention to the street lights. One of the defining characteristics of the Manhattan street at night is the soft, warm yellow glow that mixes with the people and the light spilling from bodegas and clothing stores. The generalized experience of the street lamp is more about the quality of light – the rest of the street lamp blends in and disappears.

In New York City, we have roughly 330,000 streetlights and about a dozen different designs. Right by my office I can count three: Twin acorn-shaped bulbs hang from a Y-shaped green mast near Madison Square Park. On 6th Ave, ornate “Shepherd’s Crook” lamps stand in line with standard city issue “Cobra Heads” that crane their necks and stoplights over the roadways below. Every once in a while, you notice the more decorative lights, but in general, the lights are strangely invisible.

“Classy, elegant and timeless.” Those three words are Pandora’s box in terms of the design of a street lamp. And something I’ll skip right now.

The more important issue is implementation. I personally believe that the lamps should ‘elegantly’ disappear into the urban fabric and not become an aesthetic signifier of where you are (leave that to the architecture and street life.) With that being said, the implementation of the lamps is more important than the lamps themselves. I seem to recall images of streetlamps in the middle of midtown sidewalks…that’s bad. Pulling off a cheap knockoff of Thomas Kincaid-esque street lamp under 20’ high would be bad. Trying to make the streetlamp overtly “designed” would also be bad. I don’t think the city is off base when they are asking for a “Little Black Dress,” I would just put more emphasis on the elegant and drop the connotations most people associate with classy and timeless.

The radically short time frame? Remember that the NYC streetlamps quoted as an example started their process with a competition in 2004. It took at least a year before that for the idea of modern street lamps and the City to organize the competition. It’s the fall of 2009 and the street lamps are still waiting for the green light.

Are we rushing into this? Either people have been sitting on their hands while other issues have been dealt with, or, this is indeed just coming up to the surface as an item that needs to be addressed. I don’t know enough about the requirements the city is looking for or even why there might be a “radically short timeframe,” so I won’t try to comment on any of that. But, if I understand the TIF deal correctly, it was set up +- a year ago. Using the above example, I think anyone can do the math that if we are going to design a new streetlight for a 21st century downtown OKC, we are going to need an appropriate amount of time and we’re already a year into knowing we need improved streetlights. Can Oklahoma City match what NYC produced? Yes, and this shouldn’t be a question. If it is, there are bigger issues at stake regarding talent retention, creative knowledge base, etc.

But, there is one thing that keeps pulling at me. The job of the street lamp is to illuminate the activity on the sidewalks and roadways below. The streetlamps are very important, but I believe the bigger question is the one Steve posed at the very start:

Will OKC be innovative with its downtown streets?

When I read that question, it has more to do with what is being illuminated on and in the streets than what is happening above it.

On a bicycle you rarely look back. If you decide to look it will be ashore while because you need to quickly return to look ahead. A philosophy of life! — Guillaume Prebois