It seems like the east coast network of OKC expats are providing their two cents on how Oklahoma City is moving the stretch of I-40 that runs downtown. I’ll chip in some change.

The plan is to replace the current elevated interstate with a beautiful boulevard. While the overall idea of removing the barrier that I-40 creates is a good one, there have been a few concerns raised. Most notably, concerns regarding “Mistakes About to be Made” in Jeff Speck’s recently completed walkability report on Oklahoma City.

Jeff’s main concern is that the boulevard has been planned to accommodate far more car traffic than it needs to. When you look at a concept plan that includes the new boulevard, Central Park, Convention Center and canal extension, you have to wonder if the priority towards increased traffic is going to create a barrier and inhibit ‘walkability’ where it is going to be most needed. (An aside: click on the image and look at the location of the new Convention Center. Seems like some prime park front real estate being wasted? Despite all the controversy that has surrounded it, you could look at Frank Gehry’s Atlantic Yards Development as a lesson in how to anchor infrastructural pieces like a stadium or convention center within a more appropriate urban wrapper.) 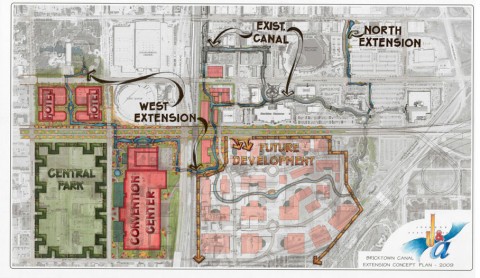 Chad and Mama Reynolds over at Massahoma, Oklachusetts ran a similar post to this one discussing their concerns and talking about examples from their own adopted home town. Their comments got me thinking about infrastructural changes here in New York City that might be examples.

Unfortunately, while interesting, I think the example of Park Avenue shows a series of incremental changes for the worse.

The Park Avenue that we know today has had a few different lives. At its earliest in the 1830’s, it was a right of way for the New York and Harlem River Railroad. In 1921-24, after almost a hundred years of complaints, accidents, and generally poor conditions, the train tracks were moved into the tunnels they still occupy today. With the noxious fumes and trains out of the way, Park Avenue finally had a chance to live up to its new name.¹ 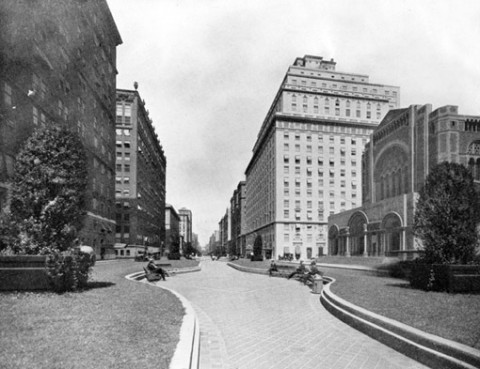 When it was first completed, the new Park Avenue was more of a pedestrian promenade than the expressway that it is today. The image above shows the sculpted park benches and large grassy medians that took up most of the width of the street. As described in the New York Times, “the roadways are 27 feet wide, the sidewalks 15 feet, and the centre strips 56 feet.”² From the dimensions described and the picture, Park Avenue was indeed a park and an avenue. This experience only lasted a few years. Shortly after construction, the avenue was widened to accommodate more cars, and the widening continued incrementally through the 70s. The image below shows Park Avenue, photographed shortly after the 1922 “improvements” making way for more car traffic. The image is pretty much the same today. 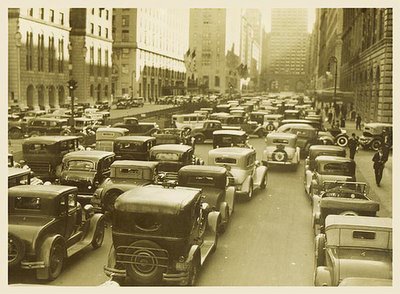 While any solution to our urban transit issues is going to be one of a balanced approach, accomodating the needs of automobile use and pedestrians, you have to look at the ‘improvement’ along Park Avenue as being completely detrimental towards the pedestrian experience of that area. I’m not a firm believer that a boulevard like Park Avenue or the proposed Oklahoma City boulevard should be a pedestrian playground, but a much more delicate and sensitive balance should be in place. Considering what is occurring in Oklahoma City regarding ‘walkability,’ and recent events here in NYC regarding PlanNYC, congestion pricing, bike lanes and pedestrian malls, the following letter by Frederick Wright, Secretary of the Surface Line Operator’s Traffic Committee, makes for interesting foreshadowing – considering it is from 1926:

New York’s traffic issue is by no means a hopeless one, and the only reason why it is no nearer a solution is that no one has wanted to shoulder the responsibility of suggesting that restrictions be imposed on the private automobile, which is the primary cause of traffic congestion….

[The traffic problem] will not be solved by demolishing hundreds of millions of dollars worth of masonry from one end of Manhattan Island to the other in order to construct new thoroughfares.

It will not be solved by chopping down trees and encroaching on our open spaces in order to lay new miles of asphalt….

Does the public favor the expenditure of large sums of city funds to provide roadway accommodations for a few thousand additional private car riders, or does it believe that its interest will be better served by utilizing, at no cost whatsoever, 100 per cent of our existing streets for all forms of moving traffic? ³

New York City is still trying to figure it out. But, others can learn from our experiences. To paraphrase Oklachusetts, if Oklahoma City’s goal is to create a walkable, urban, downtown environment, than the infrastructure needs to encourage people to experience their city in a way different than the suburban dashboard experience.