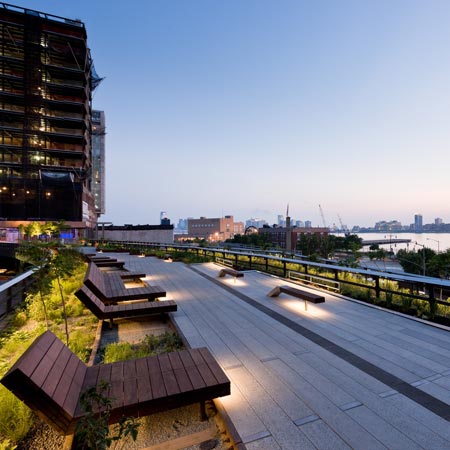 I’ve had the chance to walk the High Line a few times now and wanted to offer up some brief commentary of my own. While I don’t necessarily want to comment on the landscaping or design by Field Operations, I will say that in short of leaving the High Line as it was, they could not have struck a better balance at creating access to this derelict relic while retaining it’s wild, over run qualities. The original image of this forgotten place in the middle of the City galvanized support for the project, and in my opinion the final result is designed in a very understated and successful way. The path, benches and lighting appear as a well planned and wonderful contrast to Piet Oudolf’s very naturalistic and wild landscaping selection. 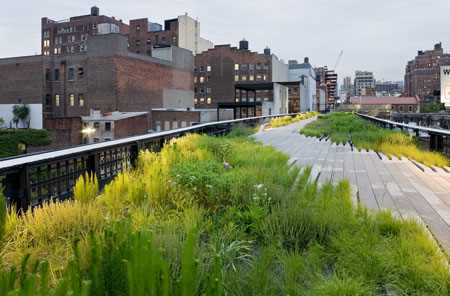 The High Line is just about three stories above the ground. This is one of the few, if only, public places in the city where you can have this experience and still maintain an intimate contact with the street life below. (On approaching the entry point at 14th street, one views a steady stream of people passing above – for me a nice allusion to the continual line of freight cars that once passed and served these same people.) This subtle change in height opens up an entirely unique perspective to the city only open to those lucky few with rooftop terraces above the brownstones of west Chelsea. A wonderful sampling of New York occurs on your walk, from billboards filling your perspective, to cornice lines and washing lines filled with laundry to those longer views that open up down the narrow side streets or out towards the Hudson. 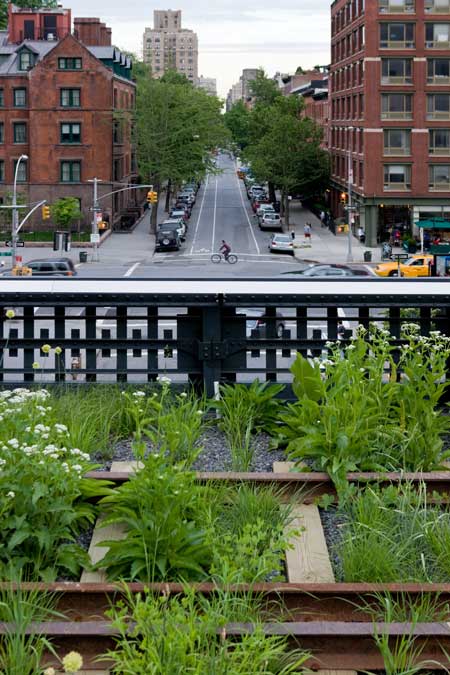 Despite the wonderful design, the biggest impression I was left with is that this is not a park. For a long time, I feel that the idea of “park” and “landscaping” has been placed under the “pastoral shadow” of Mr. Olmsted and his amazing work in parks across New York City and America at large.

I believe that the previous general conceptions of what a park should be center around the idea of the rustic being inserted as a block, interchangeable as a part of the gridded system. The High Line exists in my mind as something more strategic, more surgical, and serves a different purpose than a traditional park might. For me, it quickly became one of the most wonderful elevated sidewalks – a place for a quiet stroll and a brief escape from the atmosphere of the neighborhoods below, without actually leaving the neighborhood.

The moment you emerge on to the rail bed and path ways of the park, you want to walk. There are seats and benches and movable portions that are wonderful, but what draws you forward is that this was originally build for movement and continues to act as a means of passage. Even the largest seating area, a small amphitheater, is angled down to focus on the passing traffic of cars and taxis as they pass on 10th Avenue below.

By simply sitting or standing still, you miss the narrative of the original relic itself – the sinuous path of the rails as they tunnel through an old brick buildings, long stretches that open to the river and spurs that break, dead end and redirect your focus. My wife and I walked the open portions of the High Line this weekend and I told her that I hoped that the High Line would be a generational catalyst for that romantic idea of the flâneur. 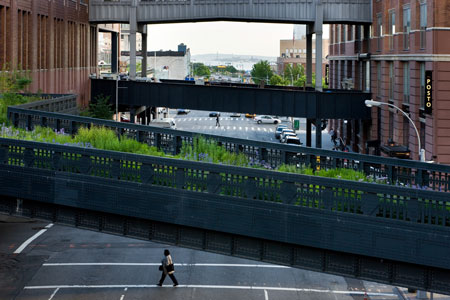 Charles Baudelair (1821-1867) described walking down diverse city streets as one of the most exciting adventures. He suggested the use of flâneur, translated literally as a stroller or saunterer, to describe the defining characteristic of ambling around town without a practical goal in mind beyond simple exploration. What you do on the High Line as a flâneur is exactly what it was designed for – you’re not getting something, or even going somewhere on a course that needs to be negotiated like the street. You’re eyes and ears are open and attuned to the unique scene around you and you open yourself up to it. When she looked questioningly at me after my poor explanation, I simply said…”remember when you and I walked along the Brooklyn Promenade and lost track of time?”

Similar to the way that the wonderful Brooklyn Promenade in Brooklyn Heights came to be (and the Promenade Plantee in Paris), you would never invent such a promenade from scratch for this purpose. The growth of the city and its evolution enabled this to become a relic and later a wonderful mix of park, urban boardwalk and part property stimulus. The High Line is not a development that a city would normally undertake if the relic was not already existing; and I believe it sets a perfect example for what is possible – a contrast to the typical demolish and build anew approach that we have seen for so long in our cities.

Over time, this project should get better and better. Hopefully it will inspire the creation of new green arteries that do more to connect our neighborhoods and the existing urban fabric of our cities than road widening and traffic planning could ever do. It’s probably something Olmsted urged from the very beginning.

All photographs are by Iwan Baan.

In The Beauty of a Park by Alexandra Lange, she asks the question if the High Line “is only a path, or will points along the way gather a sense of place?” Personally I believe it is only a path. The places, I fear will be defined more by access points and the buildings than by the ‘park.’ But, one could argue that the whole path is the “place,” in much the same way that the “journey is more important than the destination.” Regardless, the article The Beauty of a Park provides another interesting look at the project.

the High Line’s potential never was what it could be converted into, rather its potential was what it hinted at in its abandoned condition. Nature could have been allowed to quietly and chaotically work through its cycles on the bones of man’s work. Saving that would have been a entirely different design challenge.

My counterpoint, which he briefly addresses, is that while the idea of openness, green space and a return to nature probably was at its best when it was abandoned infrastructure, I don’t believe that it was a potentially better asset to the city if left untouched.

Untouched, access was only available to the well connected. (A belief similar to Lange’s questions of “its starry patrons” and how “it could come to be seen as the backyard of The Standard, et. al.”) At least now, the city can create a truly collective memory of a historic part of the city and of something that once was slated for demolition.

Centuries from now, when historians look back on New York, they will say Rome was power, Greece was glory, but New York was home. — Robert A. Caro