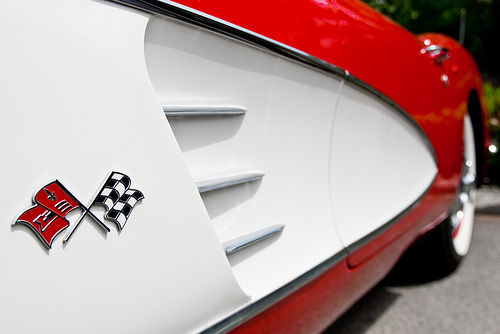 “What was good for the country was good for General Motors.” May you rest in peace. September 27, 1908 – June 1, 2009. But why oh why did you have to take our billions, only to flounder for a few months more. What went wrong? (Just look at their legacy expenses!) And how are you going to move forward GM? If you’re looking for answers, check out good round up here at Kottke.org

What does this mean for us? Here are some things I learned today: Well, now I own roughly 0.000000435% of GM. Wow. That’s almost less than nothing. Another way to look at it is that each of us paid $362 for that equity stake.

Here we are, saddled with 60% ownership of an obsolete company that invented “planned obsolescence” – that’s the annoyingly painful sound of irony ringing in your ears. From the start of these recent events, and even during the “ridiculously idealistic” phase of my youth, I’ve believed that “what’s good for the country is good for General Motors.” But for me, that meant that the only way to save GM is to kill GM. (Maybe we should all watch “Roger and Me” again.)

While losing over 20,000 more GM auto workers is never a good option, it doesn’t mean they can’t continue on as 20,000 laborers in advanced manufacturing. These workers are part of our dwindling industrial capacity and they have the skill sets needed if we intend to create and build a much more sustainable, forward thinking future. I enjoy German engineering and the marvels of what Apple has created from Chinese tech manufacturing, but why should the manufacturing of our infrastructural network and goods be offshored?

Since GM is being “reorganized” by the federal government, and I own 0.000000435% of the company now, here are a few suggestions that might actually benefit the nation, the workers and even GM. These idea’s aren’t new, and they represent a wealth of current opinions that have been voiced on the issue.

Just as we did after the attack on Pearl Harbor, the President must tell the nation that we are at war and we must convert our auto factories to factories that build alternative energy vehicles, mass transit vehicles and alternative energy devices. Within months in 1942, GM halted all car production and immediately used the assembly lines to build planes, tanks and machine guns. If you have problems calling this a “war,” let the brass at the Pentagon persuade you. I could enter into a debate about ecological issues, oil companies, etc – but I don’t need to. The military has been getting serious about transitioning to cleaner energy operations because it’s clear that climate change will be one of the most urgent national security issues of this century.

Don’t put another cent into the accounts of GM to build cars as we know them. Instead, use that money to keep the current workforce – and most of those who have been laid off – employed so that they can build the new modes of 21st century transportation. Let them start the conversion work now. For the time being, build only hybrid or all-electric cars (and improved batteries or dual fuel systems). It will take a few years for people to get used to new ways of transportation, so if we’re going to have automobiles in the traditional sense, catch up with the rest of the world and have a more efficient, responsible fleet. Start building next month and provide tax incentives for those who travel by hybrid car or use mass transit. Also give HUGE credits for those who convert their autos to clean-fuel/flex-fuel/hybrid energy and get rid of the loopholes that are keeping business from opening up that provide these conversion services.

The announcement that we will have funding and a national plan (CNN) for high-speed, reliable trains criss-crossing this country is a good start. Japan is celebrating the 45th anniversary of its first bullet train this year. Now they have dozens of them. The U.S. is born to compete and we hate losing. They have had these high speed trains for almost 50 years — and we don’t even have one! As Obama said “this is not some fanciful, pie-in-the-sky vision of the future. It’s happening now. The problem is, it’s happening elsewhere. Not here.”

Connecting some of the most economically and socially important corridors in the country will literally get the country moving faster out of this current situation. And while efforts like this would please our closest high-speed allies in France, Canada, Germany and Japan, this is a domestic issue. The growth of the rail infrastructure is where GM should factor in heavily. Build those light rail engines and high speed trains in the GM factories and hire local people everywhere to install and run this system. A few days ago, Michigan’s governor Jennifer Granholm apparently pushed a plan along these lines. During the rail summit at the White House with Joe Biden, Ray LaHood and several other governors, Granholm was making the case that it’s time to start making railcars if we’re going to be building a passenger rail network.

Companies like Siemens make billion dollar deals from the Chinese, and European companies are expecting the US to be a $150 billion market for train equipment. What’s the excuse for not trying capture ALL of that projected market? At the turn of the 20th century, the government started building roads and began the massive shift from mass transportation to the ‘one-person-one-car’ method that exits today. It’s rumored that GM dismantled mass transportation in the United States piece by piece in order to expand auto sales and maximize profits. To speed up the process the Government started, the auto and road industries bought local mass transit systems and privately-owned railways. These were then closed or allowed to deteriorate. If GM can dismantle it, let them put it back together to gain revenue.

It seems like a self evident choice that infrastructure projects would be one of the more beneficial applications of stimulus funding. In addition to interstate projects like the national rail plan, cities across the country should be implementing local mass transit projects. USA Today featured an article on projects linking downtown cores to their airports. Dallas already has plans to connect Love Field and DFW airports. (Where is Oklahoma City on this? If a convention center is such a big ticket item, wouldn’t it be an easy sell to add some ‘pork’ to that package by creating a hard link to the airport?) A national effort like this is transformational in the scale of the interstate highway projects of the 1950’s and 60’s and would balance our transportation network. To make this work, initiate a national program to put light rail mass transit lines in all of our large and medium-sized cities. Hire the unemployed to upgrade and build these new lines all over the country.

This should have been done yesterday.

With the rest of the workforce and unused industrial capacity, transform empty GM factories to facilities that build. It could be windmills, solar panels, fuel cells…whatever. It’s been done before. In 2006, Oklahoma City lost around 2,500 jobs when the local GM plant closed; but the city and its leaders rallied to purchase the former assembly plant and re-purpose it to support the aerospace industry and Tinker Air Force Base. The estimates are now that it employs over 3,000. We need to research, develop and build this technology now and there is an eager and skilled workforce who can build it.

Why am I saying this. Almost forty years ago on July 20th, America put a man on the moon. Then we did it 5 more times. Let me say that again. It was 1969 and a man walked on the freakin’ MOON. There is more combined computing power in my iPhone and personal laptops than NASA had back when they started the program. And they managed to squeeze Neil, Buzz and Michael into tin can, use a rocket to shoot them into space, and bring them back…Safely.

It’s 2009 and we are just now figuring out that regenerative breaking, hybrid electric engines, and fuel economy might be a good thing.

One hundred years ago, the founders of General Motors helped convince the world to give up their horses and carriages and try something new. In this experience of individual freedom and sanctuary behind the wheel, it seemed to serve us well. But we are now in a new century with a new set of realities to face. My grandfather told me stories of riding his horse to school, and at some point in time I want my grandchildren to face a much different future and laugh at a past where we had to pay to put explosive foreign liquid into a car, and manually operate levers, pedals and wheels.

You can do anything, but not everything. — David Allen