This weekend passed with a sarcastic tone…the calendar laughing at me as it quietly stated “Summer Begins.” As I looked out the window, all I could think about was of images of Junes past. A warm June. A Dry June. A lost June.

In this lost city of New York, a shower or thunderstorm has been expected –  every. single. day. 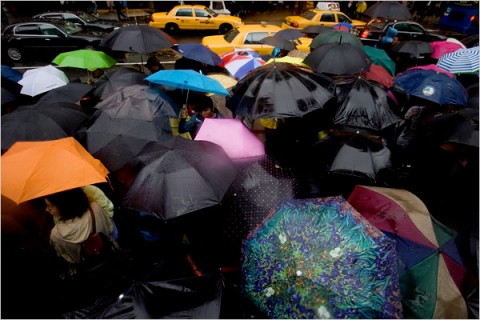 I don’t think this is just a strange fluke of the weather. I wonder when the collective will stop wondering why it’s raining so much and begin to realize that erratic weather is now the norm? The climate is changing and I believe the new pattern is one of unpredictable and unseasonable weather from here on.

I’m old enough now to remember when we used to have “seasons.” In the winter, it was cold and there was snow. And it was cold every day. In the summer, it was warm. Every day. Fall involved cool temperatures and a football. Spring involved sirens, tornadoes and flowers. As a little tike, I was taught that this predictable weather was called “climate,” and that things like that allowed farmers to predict when to plant their crops, and other similar old school vocations. But its all changing now.

The Obama Administration issued a report the other day projecting what climate change looks like in the next century here in the U S of A. (You can read more about it here.) For New York, it’s not looking awesome. 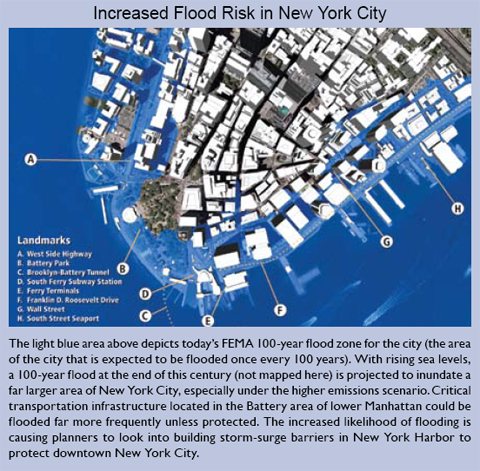 But the result isn’t just a new Venice on the Atlantic. The Gulf Coast in particular — responsible for 30 percent of the nation’s crude oil production and 20 percent of its natural gas production — is very vulnerable to disruptions in energy production from hurricanes and the like (as evidenced by Katrina, Rita and Ivan in recent years).

And it’s not about a “Global Warming” where everything is like a tanning bed.

Remember that movie where New York looks like the North Pole and wolves start eating people until Dennis Quaid saves us all? That was Global Warming. It causes rain, snow, drought, starvation, unhappiness and war. Don’t believe me? Let the brass at the Pentagon persuade you. I could enter into a debate about ecological issues, oil companies, etc – but I don’t need to. The military has been getting serious about this issue. It’s clear that climate change will be one of the most urgent national security issues of this century.

Climatologist James Hansen, who is the director of NASA’s Goddard Institute for Space Studies and the creator of one of the first climate models that predicted global warming, is convinced that the problem of climate change caused by humans is much more dire than is generally thought (subscribers only link; abstract).

Hansen has now concluded, partly on the basis of his latest modeling efforts and partly on the basis of observations made by other scientists, that the threat of global warming is far greater than even he had suspected. Carbon dioxide isn’t just approaching dangerous levels; it is already there. Unless immediate action is taken-including the shutdown of all the world’s coal plants within the next two decades-the planet will be committed to climate change on a scale society won’t be able to cope with. “This particular problem has become an emergency,” Hansen said.

Hansen is so adamant about this belief that he has begun participating in protests around the globe, an unusual level of activism for such a respected and high-ranking government official. The last sentence of the piece reads:

He said he was thinking of attending another demonstration soon, in West Virginia coal country.

Elizabeth Kolbert, the author of the piece above, reports that Hansen not only attended that demonstration but got arrested.