Vauban in Freiburg, Germany, is a new suburban neighborhood in which street parking, driveways, and home garages are forbidden. In fact, Vauban is nearly car-free, with 70 percent of its 5,500 residents getting around solely by bicycle, foot, and transit. The suburb was designed with stores more evenly dispersed among homes than in a typical suburb, making for easy access on foot or bicycle.

The few key words in the opening sentence of that first paragraph are “new suburban neighborhood,” and I am especially interested in how this kind of model might serve growing urban areas like Oklahoma City. The press, various blogs and the City itself speaks about improving walk-ability in the downtown core and adding to the density on certain corridors like Automobile Alley, but what if it had a fresh, clean slate to start with – A place easily accessible to city attractions via walking distance, biking and even highway connections. What if the city used this development as a model for future growth, and as an iconic centerpiece in its 21 Century plan for growth? 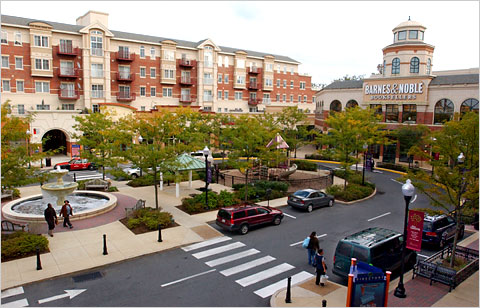 Many people have probably been to new “city center” projects that have evolved around an updated version of an outdoor shopping mall anchored around a “town square” fountain, and a few offices and condos built atop. The Plaza in Kansas City being the originator of this concept. These projects have become an easily digestible form of urban exploration, and there is plenty of cultural commentary on these truly being civic centers due to current social habits. But this isn’t about those types of projects because I believe they aren’t leading us in a better direction. You need more than fruit to make a full meal – Banana Republic and an Apple do not make a neighborhood and in any environment, you need true balance and variety.

What Vauban is closer to are what projects like the Pearl Street Mall in Boulder, Colorado and the Third Street Promendate in Santa Monica have attempted to do. But the main difference and shortcoming of these projects are that they are primarily retail driven, and have been overlaid onto a city grid that was never imagined to be pedestrian only. Take for example the progress and difficulties that are happening here in New York City: Bike lanes and the closing of Broadway.

A recent article in New York Magazine about these issues is telling – Even in NYC, change is met with heavy resistance. My opinion is that you have to start somewhere, sometime. And in the case of this article, to meet a larger vision you have to do the hard things first. What does this mean? From the mouth of New York City Mayor Bloomberg himself:

I’ve, for example, always thought you do the tough things first, right up front. It’s a terrible mistake to try to pick off the low-hanging fruit and have some successes right away and try to boost your popularity and then three-quarters of the way through your term you find that you’ve really got to face the tough issues and make the tough decisions and if you don’t do it then you say, well, I’ve got a re-election so I don’t want to do it. That’s how people get trapped into not addressing the issues that they’re hired to face.

…And I have to say I agree with that. Do the hard things first.

To me, the development of MAPs 3 in Oklahoma City could simply read like a formulaic checklist of projects if it doesn’t address a bigger vision and how that vision is going to affect the future generations of the city.  (For more excellent coverage of the development of MAPs 3, check out Imaginative America.) If one is deciding how to place a priority on what should be addressed, the question should be to ask if the project is going to change the nature of how the city works or functions. The city is moving forward, and there has been some much needed growth, I can’t deny that. But will MAPs 3 move the city forward in a way that defines a much different future than the one that currently exists? Are we doing the hard things first or deferring?

Regarding Vauban, Pearl Street Mall in Boulder, Colorado and the Third Street Promendate in Santa Monica, I believe a modified versions of these ideas would work in new, ground up developments like the Waterfront area or portions of the Core 2 Shore Development in Oklahoma City. There is a tantalizing line in the NY Times article: “When I had a car I was always tense. I’m much happier this way,” said Heidrun Walter…as she walked verdant streets where the swish of bicycles and the chatter of wandering children drown out the occasional distant motor.” Why can’t that happen in a ground up urban development? What I would love to see is a mixture of the ideas behind Vauban and the waterfront development in Victoria called Dockside Green. 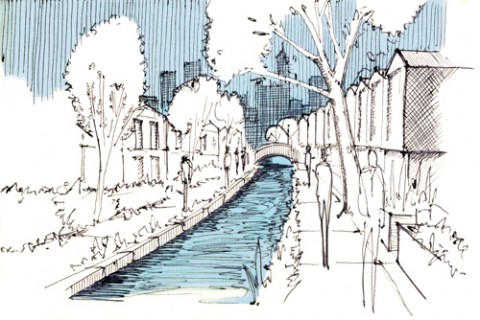 Imagine in Oklahoma City a new district that is pedestrian focused and has been planned around a mass transit program that addresses all scales, from walkability at the street level to neighborhood and community connections beyond the downtown core. Direct bus or trolley lines from the center of this neighborhood connect to light rail at the central business district. (These should be planned for now, but developed incrementally over time – There is no reason why a comprehensive plan to have access to the Airport, Northwest OKC, Edmond and Norman, all accessible by various methods of public transit, should not be seriously discussed now.) Primary artery roads within the district allow full vehicle access, but secondary roads and the buildings that front them have been designed to place one within easy walking distance of either parking garages or transit stops. Auto access could easily be accommodated for emergency and delivery reasons and a car co-op with Zip Car can be established for those that don’t want to own a car.

Energy is addressed in creating integrated networked systems that help meet carbon neutral goals. Co-gen systems for the entire neighborhood would be employed to take advantage of the energy load use distributions provided by the mix of office/retail/residential and help establish a more balanced energy grid. The area would be a mix of uses between 3 and seven stories that are accessed from primarily pedestrian streets and backing up to a shared green/canal space linking to the Oklahoma River. But the canal isn’t a show boating thoroughfare. The system of canals would function as bio – remediation filters: on site water treatment that could easily save a hundred of thousand gallons of water annually. The series of canals, ponds and rooftop gardens also assist in on-site storm water storage and provide significant public open space and habitats for life. It’s easy to see the allure of living in a city where right off your back patio or balcony you’re not only seeing the glittering skyline, but rather than the hum of passing cars, the sounds of frogs, crickets and jumping fish fill the evening air.

Now, I don’t feel that a completely car free community is the answer. There is a certain freedom the automobile embodies; something intrinsically embedded within the DNA of America’s unalienable rights. And the current system of almost all American cities has been designed around reliance on the auto. But we must also take a look at what our current reliance has wrought, and how we address this unhealthy chemical dependency. Gas, natural gas, fuel cells…all the technologies might address the issue of pollution, but in their current form only perpetuate a status quo of what we are accustomed to rather than actually addressing the real tears in the urban fabric. A car free model like Vaubaun may not be the answer, but I do believe that the same type of thinking that produced Vauban in Freiburg might produce something equally unique and incredible in Oklahoma City.

Something different and forward thinking is what MAPs3 should be providing Oklahoma. For mass transit to work, you need mass and Oklahoma City lacks any form of density that could realistically support mass transit. But I do believe there is a unique hybrid solution out there. The above was only a single example of a neighborhood scaled approach of development and transit – only a small, incremental part that demonstrates a larger vision for development of the city. The larger issue at stake is how to position the city and the opportunities it provides in a place that doesn’t fall behind and decay because it is still based on, and growing from, early 20th Century planning.

Can MAPs 3 plot a more sustainable and forward thinking course?

And can MAPs 3 take advantage of our fundamental qualities to allow Oklahoma City to be an even bigger example for the nation. The city’s central location on the primary North-South and East-West corridors would allow for job growth in environmental research and manufacturing and position the city as the backbone of the region’s economy. Imagine Oklahoma as a national center for research and development of renewable energy, resources we abundantly have via solar, natural gas, wind or bio fuels from our agricultural areas. It could also serve as a core workforce pool for the service industries regarding these new “green collar jobs,” but only if these are placed on the agenda.

More importantly, if Oklahoma City could create a viable plan for transportation measures in a suburban city, imagine what a precedent it would set. Most of the recent urban issue related commentary that I’ve been reading about NYC and OKC is in regards to transit and transportation. It doesn’t matter the density or scale of the city, the issue in all its scales is at the forefront of thought right now. Not every city is like New York, Chicago, or Boston. Nor should they be. Oklahoma City is an environment with its very own idiosyncratic properties. MAPs 3 and the solutions it provides should be fundamentally Oklahoman and unlike anything else. If it can attempt to solve the bigger problems that are far beyond not having enough convention space, then it becomes a benchmark for the rest of the nation.

The cure for anything is salt water – sweat, tears, or the sea. — Isak Dinesen