Its about that time. When I walk the streets, I become that jerk that recalls “that time I was in Spain, or Germany, or the South of France.” Its annoyingly cliche, but unfortunately it does remind me of that time in Augsburg! (It doesn’t really matter about the exact location. Try it some time on someone, they will look at you with an envious loathing.) The sun is a bit brighter in the morning, and when I get off the subway after work, Central Park is still reflecting that beautiful yellow and orange glow of the sunset.  In a few more weeks, the temperature will confirm that spring is here, and the birds will rejoice, and the flowers will sing etcetera etcetera.

What I’m getting most excited about is getting back on the bike for my morning commute. I currently ride a 1965 Raleigh Deluxe Sport 3-Speed. At the present time, the bike lacks anything that would infer that it is indeed Deluxe, or Sport. And, as of a few months ago, it lacks the 3-Speed. So needless to say, I’ve got some work I need to do if its going to carry its badge (and me) with honor. I’ve talked about this earlier and I still think the reason for my interest in fixing this ol’ boy up is the same: it reminds me of my days and long nights fixing my 56 Chevy. There’s gratification in seeing your work done, and seeing your work ‘work.’ The thought races across your brain that I can build something that ‘does something,’ in the most active sense of the phrase.¹

I also grew to immensely appreciate that the more time I spent working on my truck, the better I understood how it actually operated. I knew exactly what happened when I pushed down on the brake pedal and where the brake fluid flowed and how the calipers compressed. It’s the same feeling taking apart an internal 3 speed hub. Although its beginning to look more like a complicated watch to me.

Which is part of the reason this little bad-boy below me (Gary Fisher Simple City 3 Speed) is on my acquisition radar. It’s shiny, and new (which, who doesn’t like both of those adjectives, especially when combined together) and lighter. Soooo much lighter. Gotta love a good, solid bike – but at the end of the day, I don’t need any more 3 speed-less weight. And in my post-rationalization, self convincing way, having something I can truly use as a commuter will allow me to spend some much needed quality time doing a really thorough restoration job (my desire to get back to craft) on the Raleigh while still being able to commute to work each day.² 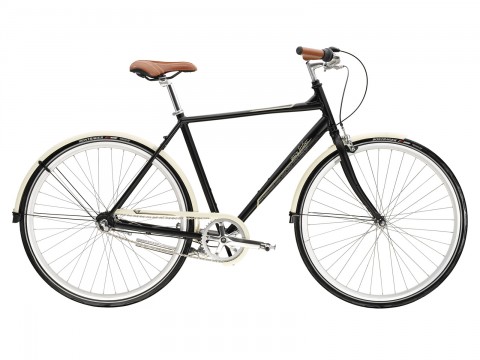